It's official! A new park for Wellington Village!

After years of pushing for much-needed park space in Wellington Village, it appears our dream is about to become reality! Jeff Leiper announced in his recent Newsletter update (Kitchissippi Weekly Email 318 on August 5th) that the City's acquisition of 115 Spencer Street (at the north-west corner of Huron Avenue North) is complete!

Here is what Jeff wrote this past weekend:
As I noted in a previous newsletter, I've been hoping to use our ward's cash-in-lieu of parkland fund to acquire the property at 115 Spencer to turn into a park - the area very much needs it. I'm happy to say that I came back from vacation to news that the sale is now firm! It will close sometime in mid-September unless the buyer and seller accelerate that. Our parks folks have already engaged infrastructure services and the first step will be demolition as soon as possible. Over the winter we'll consult on how that park should be built and with some luck we can break ground early next year.
And here is a longer piece he wrote in Kitchissippi Weekly Email 316 on June 26th:
I'm thrilled to say that it looks like we're very close to acquiring the property at 115 Spencer to be re-developed into a park. That acquisition will be finalized when it get a clean environmental bill of health, and after community members researched the parcel's history it seems almost certain that it is uncontaminated. It will take a while to actually become a park, and there will have to be a demolition and then consultations on how residents would like to see it configured. The good news is that our ward has a very healthy cash balance in parkland funds, and this should be a priority for the city.
It is only in the past six months that, in consultation with community members, I've contemplated diverging from the parks plan that we developed together in the last term of Council. However, the message I continue to hear from residents is that park space and space for trees is critically important - and that has only become more resonant and insistent as the implications of the new Official Plan, the Westboro Infill rules, and the new R4 zoning have become clear.
Over the Christmas holidays, we had a unique opportunity to acquire parcels and expand another park. Ultimately, despite extremely hard work by City real estate and parks staff over our holidays, we simply couldn't compete for the parcels on the open market in this instance, and several structural hurdles were identified that I expect will be addressed in the next term of Council when we craft an urban parkland acquisitions strategy.
When I agreed to pursue that opportunity, I also made a commitment that I would consider diverging from our parks plan if an opportunity came up in the area bounded by Scott/Holland/Wellington/Island Park. That is a very populous area and residents have to cross an arterial in every direction to get to a play structure.
Residents alerted me to this corner lot, and I hope in a few weeks I'll be able to say the rest is history.
The use of our ward parkland funds will become more constrained in the coming years as a result of provincial changes. Some of the control over those funds (which come from development) that councillors have enjoyed will be reined in through the creation of spending plans more akin to how development charges are calculated and allocated. To date, I've been able to use those funds flexibly to achieve a complete re-development of Laroche Park including marquee field house attracting millions in City money to the effort, build a very well-used new field house at Van Lang, achieve amenity and climate resiliency upgrades at Dovercourt (in addition to helping keep it afloat in the pandemic through restructuring some of their own investments), de-pave Pontiac Street to enable the incredible work Champlain Park volunteers have been doing there, and to do lots of other small one-off projects. That will change. I believe that by pivoting to take advantage of an opportunity to buy land we are dovetailing with changing needs. Property values in our ward are not going down, and it behooves us to be nimble in our approaches. 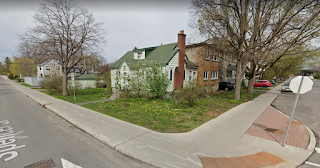 The house that stands there now was the long-time home of the Connell family from 1950-2003. It was built in the fall-winter of 1943-1944 by local builder Michael W. Cain. Prior to that, the lot sat vacant, and was originally part of the upper north-west corner of the 19th century Hinton farm. The lot was sold in the original 1920 auction for $275, but at the time this area of Wellington Village was still susceptible to heavy flooding, so it was one of the last lots to be built on. Believe it or not, the original lot owner surrendered it to the City at the onset of the depression in 1928 over $17.74 of unpaid taxes!
The lot is exceptionally deep, at 130 feet (most of the lot depths in north WV are 100 feet), and is 33 feet wide.
So Wellington Village residents, it is time to start thinking about what YOU would like to see in the park! Jeff's office will be looking for input on how the space will be used, laid out, purchases to be made, etc. There is no forum yet established for this input, but rest assured we will share this information with you as soon as it becomes available!
The WVCA will have a role in helping coordinate this feedback, so if you are not yet on our mailing list, please visit www.wvca.ca and add your email via the form on the right-side of our webpage!
This is a huge win for Wellington Village, and a great success to have dedicated park space back in the north half of our neighbourhood since we lost Grange Park back in the mid-1990s!
Posted by Wellington Village Community Association at 10:14 AM